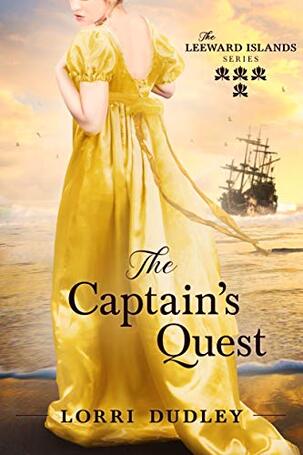 Innocent mistakes can have dire consequences.

Pricilla Middleton only attended the Lemoore house party to keep her friend out of trouble. Now, her only chance to keep from becoming a gossip column headline is to sneak aboard her brother's ship and pretend she'd been visiting him instead of taking part in the debacle. Before she can speak to her brother, the ship sets sail, and the man in charge is not at all who she expects.

Captain Tobias Prescott, son of an infamous war hero, has been assigned on a critical mission to deploy warships in St. Kitts for battle in New Orleans. Unfortunately, his orders require him to assume command of a friend's ship, and he must weigh anchor the instant the former captain is escorted down the gangplank. When they reach open waters, the last thing he expects is to find a woman hiding in the captain's cabin, yet his mission is too urgent to return her to England.
​
The Middleton name has always brought Tobias trouble, and Pricilla is no exception. As the waters clear and the temperature warms, the danger escalates too. Yet Tobias discovers the intuitive and strong woman who struggles to hide her anxiety is nothing like her disloyal brother. He may lose the opportunity to help his country, but perhaps he can still save the woman who's rescued his heart.